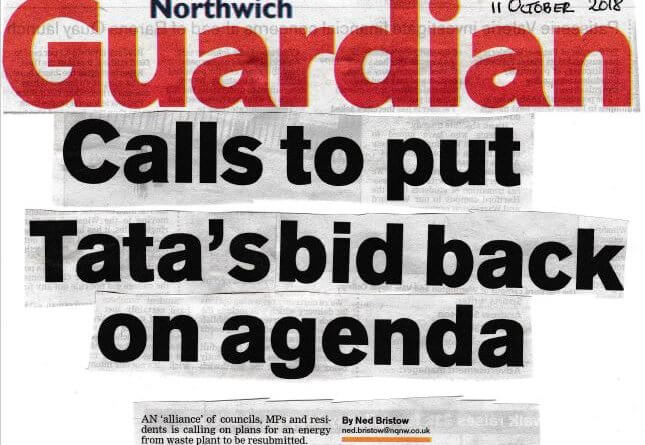 We were delighted to see this story back on the front page of our local newspaper last week. It’s heartening to know that all the hard work in trying to highlight the problems inherent in this scheme is paying off.

If you didn’t read the story, here’s a link to the online version, or you can read the clipped version we’ve made below. It might not be high tech but it does form a permanent record.

To make it easier, here’s the transcript from the online version but please note that online and print version differ.

AN ‘alliance’ of councils, MPs and residents are calling on plans for an energy from waste plant to be resubmitted.

The Lostock Works station was approved following a planning inquiry in 2012, despite widespread objection from those in the town and borough.

Now, following an application by Tata to increase the proposed plant’s output by 50 per cent, calls have surfaced for the entire scheme to be resubmitted in fresh plans.

During a statutory consultation period, objections have flooded into Cheshire West and Chester Council’s planning portal as well as the department for Business, Energy and Industrial Strategy (BEIS).

As well as residents from across town, those opposed to the variation application include Cheshire West and Chester Council, Northwich Town Council, Pickmere and Rudheath parish councils and MPs Esther McVey, Mike Amesbury and Fiona Bruce.

CWAC director of place and strategy, Lisa Harris, said: “I think it remains important to put on record our continued opposition to the development and the impact it has on the local area.

“The local planning authority continues to have reservations about the impact that this development will have.

“On this basis we believe that it would be better and more appropriate to give interested parties an opportunity to comment by the submission of a new application.

“If this suggestion is not acceptable then we recognise that there are limited planning grounds on which we could object.

“Nonetheless we urge you to look again at the impacts of this development on the local population and to bear in mind the cumulative effect that two adjacent, similar permissions [this site and Orsted’s REnescience plant] will have in the area, especially in relation to highways and emissions.”

Mrs Harris added: “To date, there is still public concern regarding the development and this is reflected in several reps that the council has received upon this variation application.

“I would stress that they must be taken into consideration as part of the assessment of this variation.”

Concerns largely focus on Tata claims that the amount of waste needed will not increase should the variation application be approved, but rather efficiency improved.

An increase in output, objectors say, must also lead to an increase in traffic around the site and in emissions.

Christopher Lecointe, director of environmental planning at Tata, said lorry movements and waste output would not exceed the permissions granted by the planning inspectorate in 2012.

He said: “The higher output 90MW Lostock SEP will comply with the limitations on traffic movements imposed by the original planning consent granted on October 2, 2012.

“This means the applicant is not seeking to increase HGV movements beyond those … previously found to be acceptable by the Secretary of State.

“The emission rates for the high output 90MW Lostock SEP remain below the conservative rates reported in the original environmental statement.

“There is no change in the stack height and the reported levels of significance are unchanged.

“Our aim is that the SEP makes use of the more efficient boilers and turbines now available on the market, so that the plant will generate more energy per tonne of waste than the original consent.”

Fraser Ramsay, Tata Chemicals Europe’s strategic projects leader, said: “Cheshire West and Chester Council have made their position clear on the development and the planning consent.

“The Department of Business, Energy and Industrial Strategy, will determine the Variation Application whilst taking account of the representations received during the consultation period in accordance with the regulations.”