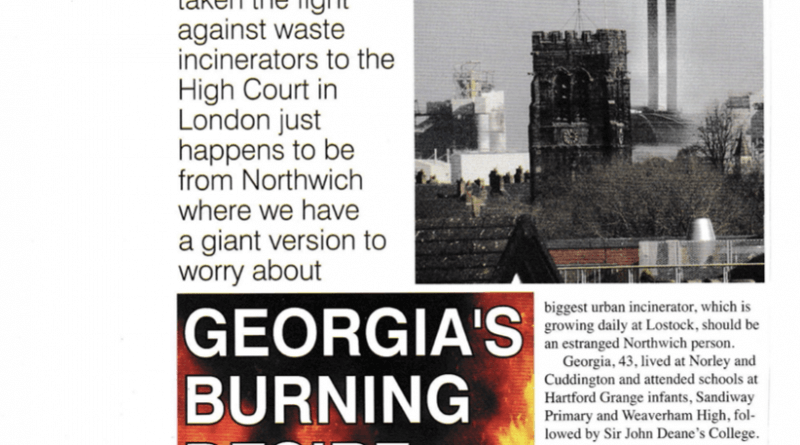 This is a very brief Update to let you know that we have circulated the report below from OurTown magazine to all members of CWAC Council together with the message below from CHAIN. As you know, TATA has taken another step towards leaving Northwich altogether and the lie underpinning the original planning application for the incinerator, that it was essential for the continued existence of the Lostock plant, has been exposed as CHAIN predicted it would.

‘To Members of Cheshire West and Chester Council from CHAIN

You may be not be aware of it, but when the waste incinerators for which planning permission has been granted are operational, Cheshire West and Chester will have the highest concentration of these noxious and polluting plants in the UK. Indeed, if account is taken of the nearby Viridor waste incinerator in Runcorn, the area will have the highest concentration in the world. What a claim to fame! Well over 2 million tonnes of Carbon Dioxide emitted to the atmosphere every year and even more if LSEP gets its way and is allowed to burn more waste in the plant now under construction at the edge of Northwich Town Centre. CWAC Council must act to persuade BEIS to refuse the latest planning variation application. It would be beyond crazy if it is foisted on our community.

What a time for the Borough to be setting out to meet the challenge of becoming carbon neutral by 2030.

In this situation it is obviously very important that members of our borough council make themselves aware of the issues involved and, accordingly, CHAIN felt it appropriate to provide you with the attached article from what is an excellent publication,’our town the northwich magazine’ that has wide circulation in the town and the surrounding area. We hope that you will read it and take action before it’s too late.’

In other news, LSEP continues with its insulting, so-called ‘consultation exercise’ about its proposal to increase the amount of waste to be incinerated in the Lostock plant by 21% and the number of permitted HGV vehicles by 57% on the misplaced belief that the locals in Northwich will tolerate anything for the 50 jobs that the incinerator might bring and ignore the hundreds of jobs lost because no sane business would want to locate anywhere close to an ugly, stinking, noisy rubbish burner constantly belching dangerous emissions on the nearby area.

Thanks as ever for your support.