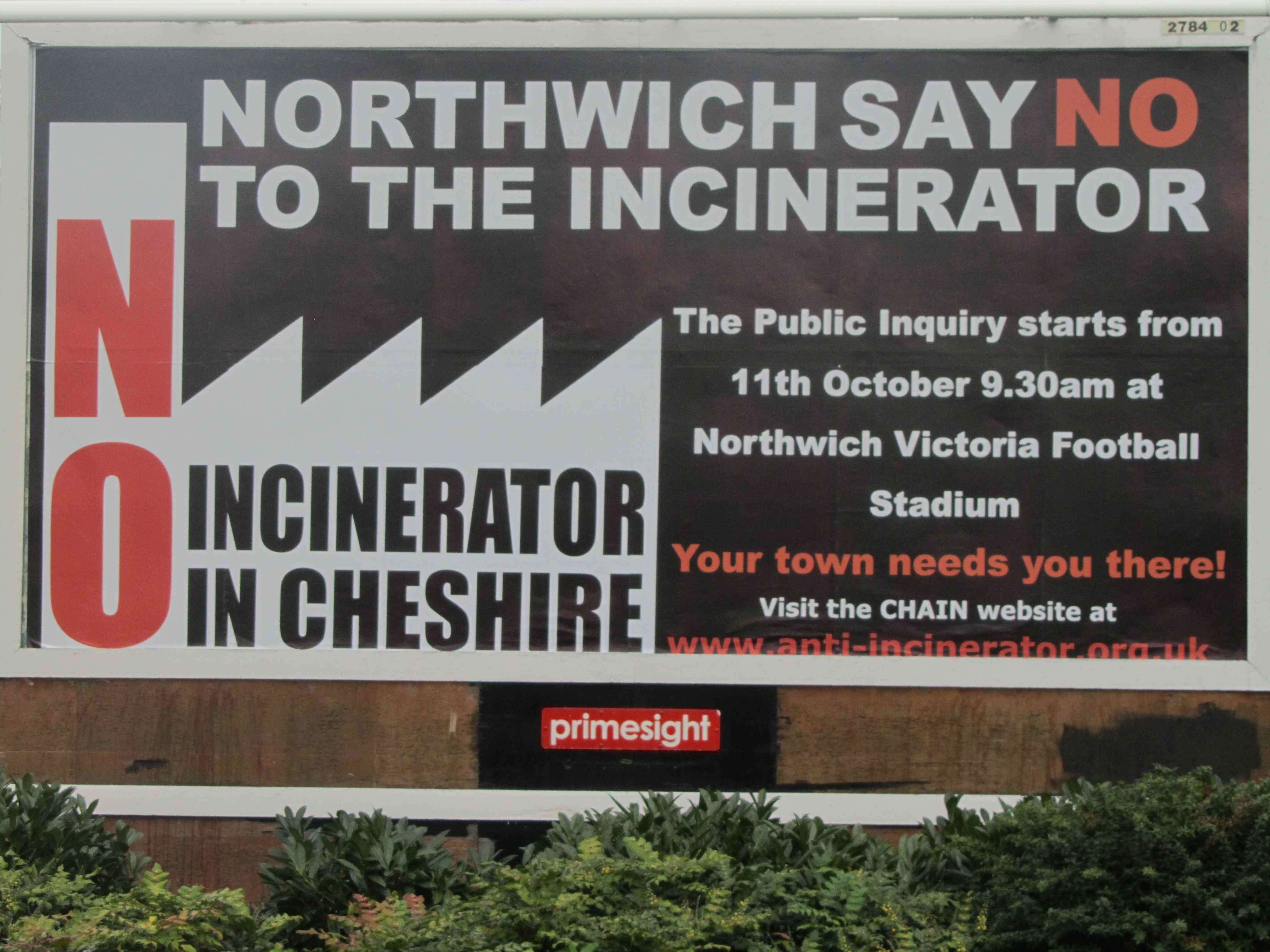 It is more than 10 years ago now that the first announcement was made about plans to build a waste incinerator in Lostock (the billboard is from 2011). CHAIN has been in the front line of resistance along with members of the community to what would be an assault on our town from the very beginning. That fight will go on into 2018 and beyond if necessary.

The good news is that TATA’s failure to find potential suppliers of waste for an incinerator in Lostock continues and, as a result, construction is not likely to commence in the foreseeable future. However, the planning permit will continue indefinitely and the maximum risk for residents will probably come when TATA finally decides to close the decaying plant and sell the site complete with planning permission for a waste incinerator.

Both councils have just released the Northwich Neighbourhood Plan for comment. The authors of this glossy 88 page document could not bring themselves to mention the TATA waste incinerator which will be at the edge of the town centre and will be the largest building in the county visible from all parts of the town and the surrounding area.

Ironically, the plan talks up their intention to make Northwich a tourism centre presumably attracted by the sight and smell of hundreds of lorry loads of garbage every day going to and from the incinerator. The Plan also confirms TATA’s intention to vacate its Winnington production site leaving only the existing gas-fired power station that will meet all of the Lostock plant’s energy needs.

This undermines the major justification given by the company at the public inquiry in 2011 which was that planning permission was essential for the future viability of both Lostock and Winnington plants.

One CWAC rule for Peel Holdings and no rule for TATA

On 17 September this year, CWAC Council approved a planning application from Peel Holdings, based in Manchester, for the construction of a waste incinerator near Ellesmere Port with an annual capacity of 350,000 tonnes.

This was unusual because Peel had previously received planning permission for an incinerator of 850,000 tonnes on the same site in 2013 but had decided to reduce the capacity to the lower figure. So, in accordance with the rules, it submitted a new planning application to CWAC that was duly accepted and approved.

Contrast that orderly process (even if you are opposed to incinerators) with the situation concerning the TATA plant.

Planning permission was granted in 2012 for a 600,000 tonnes capacity plant in Lostock. Soon afterwards, TATA made known its intention to change the capacity to 300,000 tonnes. CHAIN rapidly brought the matter to the attention of CWAC Council.

We pointed out that the significant changes in the plans were in contravention of the conditions set out in the Government’s planning consent and the company should be requested to submit a new application as laid out in the consent document. In fact, like Peel Holdings has just done. CWAC Council dismissed CHAIN’s request to act and despite been asked again on several further occasions is still not interested.

Then the 17th September came along and, it seems, that the council now has one law for Peel Holdings and another for TATA.

This is totally unacceptable and grossly unfair to the residents of Northwich.

CHAIN is planning to protest in a number of ways about the council’s inconsistent behaviour. Brian Cartwright, Chairman, has already written to Gerald Meehan, Chief Executive of CWAC Council, pointing out the inconsistency and asking for an explanation. We will forward his response.

If past experience is anything to go on, it will be another brush-off but we intend to follow up and ask of the two local MPs, Mike Amesbury and Esther McVey to support their constituents by getting involved. We shall also be demanding that CWAC councillors in Northwich and the surrounding area stand up for their local communities. As mentioned at the beginning of this Update, the fight goes on.

Thanks to our supporters for their continuing encouragement and assistance