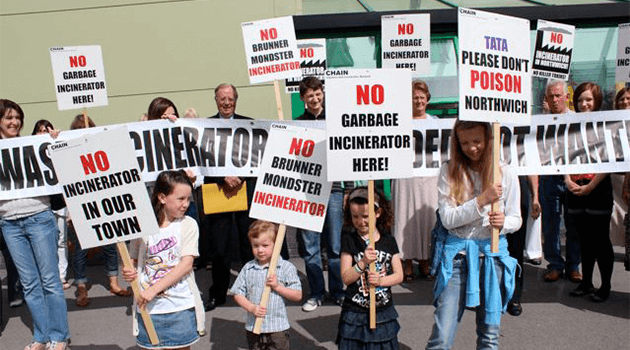 TATA received planning permission in 2012 to build a large waste burning incinerator in Lostock, Northwich. The permit is due to expire in October 2017 and thousands of local people had begun to hope that it would lapse and construction would not proceed and the fear they have that the quality of their lives and, particularly, for the health of their children and those close to them would be removed. The shocking news now is that TATA has formally applied to CWAC Council for its agreement to discharge a number of planning conditions that enable building to start.

This information came to light when a local person saw a number of small notices on the CWAC website and contacted CHAIN. No effort was made to publicise this information to residents or provide simple guidance on how they might comment or object to the applications. It is understandable why TATA wanted to slip this one through but there is no excuse for the council acting in a similar fashion.

Just to remind people, particularly those recently moved into the area, about the key aspects of the proposed incinerator plant.

It is designed to burn 600,000 tonnes of waste every year. At that size, it will be the largest in the world located in a residential area.

It would be approximately the same size as Wembley Stadium and plainly visible from long distances particularly to the east of Northwich and from all parts of Northwich Town Centre, including Barons Quay. Take a look at the huge Viridor monstrosity in Runcorn and imagine that in a field behind Tesco. That incinerator has most of its waste delivered by rail, by the way.

TATA intends that all the garbage it burns will come by road, off the Morrisons roundabout and along King Street.

The traffic implications are frightening.

According to official predictions; after the plant becomes operational, the average number of HGVs using King Street between 7.00am and 7.00pm will increase to 63 per hour.

At the busy period it will rise to 83, that’s 1.4 large HGVs plus 20 other motor vehicles every single minute. God help those who try to cross that road. Utter madness.

Watch out for the plunge in property prices and more traffic chaos in the local area and further afield in places like Davenham and Kingsmead. (The incinerator is in addition to the DONG waste plant under construction on the same site which will have an annual capacity of 144,000 tonnes.)

This disaster can be prevented

Cheshire West and Chester Council has the authority and the responsibility to protect our community from this threat. The fact is that the situation in Northwich has changed radically since planning permission was granted nearly five years ago and these changes mean that it would be suicide for the town if the council gives the go-ahead for building to commence.

For example, we know that the track for HS2 is planned to pass dangerously close to the Lostock site with the risk of more traffic disruption during years of construction and disturbance of underground gas store facilities and old mine workings.

We also know that TATA intends to deviate from the planning permit which it was granted and the Council could request a new planning application IF it chooses to do so. Our fear is that it will not bother to act.

Its up to you

CHAIN will do its bit with limited resources as we have done in the past but this time, more than ever, it will be down to individuals to put pressure on their parish councils and their CWAC councillors and their MPs and CWAC Council itself.

The Mumbai based business giant that is TATA, with its turnover of more than £80billion, usually gets its way. But we can try. Here are a few pointers:-

To repeat the key message, CWAC Council, that you elect and pay for, can save the town from this disaster if it takes appropriate action to protect it.

You can help ensure that it does.